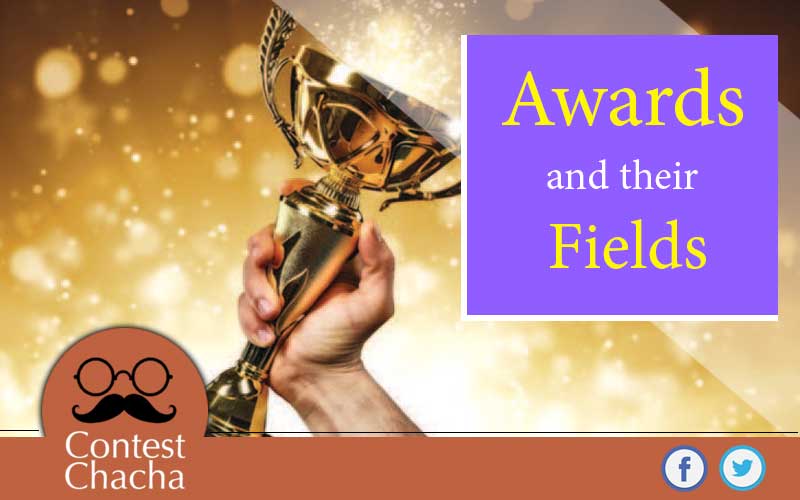 Be it for Competitive Exams, or simply General Knowledge, it’s always good to let your brain know things that matter. Awards, indeed are recognition given to people for their achievements, accomplishments, or contributions in a particular field, therefore it becomes important to know which award holds what purpose, when was it instituted, and when is it given.

Complete List of all Important Awards and their Fields

It is the highest civilian award of the India. The award was given for outstanding achievements in the arts, literature, science and public services but the government expanded the criteria to include “any field of human endeavour”. The number of annual awards is restricted to a maximum of three in a particular year.

Padma Vibhushan, Padma Bhushan and Padma Shri  awards are for exceptional and distinguished service in any field including service rendered by Government servants.

Param Vir Chakra (PVC), Ashok Chakra, Shaurya Chakra    are given for appreciating the brave and gallant.

The Nobel Prize is widely regarded as the most prestigious award available in the fields of literature, medicine, physics, chemistry, peace, and economics.

It is an annual award for the best original novel, written in the English language, and published in the UK literary award.

Vyas Samman is awarded annually by the K.K. Birla Foundation in recognition of the Hindi literary work published in past 10 years.

The Moortidevi Award is an annual literary award in India presented by the Bharatiya Jnanpith organization for a work which emphasizes Indian philosophy and culture.

The award was instituted in 1991 by the K. K. Birla Foundation. It is an annual award given for outstanding prose or poetry literary works in any 22 Indian languages.

The award was instituted in 1961 and it is It is presented by the Bharatiya Jnanpith, a trust founded by the Sahu Jain family, the publishers of the newspaper The Times of India. It is an annual award given for outstanding prose or poetry literary works in any 22 Indian languages.

Bihari Puraskar is a literary award instituted by K. K. Birla Foundation. The award is named after the famous Hindi poet Bihari and is awarded to an outstanding work published in Hindi or Rajasthani by a Rajasthani writer.

This is an annual American awards ceremony honoring cinematic achievements in the film industry.

The Dadasaheb Phalke Award is India’s highest award in cinema. It is presented annually at the National Film Awards ceremony by the Directorate of Film Festivals, an organisation set up by the Ministry of Information and Broadcasting.

13. Arjuna Award – outstanding performance from the sports persons in sports and games.

The Government has modified the format of Arjuna Award very recently and as per the revised schematic guidelines a sports person must have very good consistent performances for the previous 3 years at the international level to be considered as eligible for the Award.

The award is named after the very famous archery coach, mentioned in the epic of India known as the Mahabharata. This very award is not related with the sports persons who are still playing in the field; instead this is related to those eminent coaches of any particular sport.

The award that is given to the veteran sports persons of India for their lifetime achievement in their respective field of sport is named as the Dhyan Chand Award for Life Time Achievement in Sports and Games.

The Rajiv Gandhi Khel Ratna is the highest honour bestowed to a sports person for his/her achievements in India.

The Royal Institute of British Architects Stirling Prize is a British prize for excellence in architecture.

The Aga Khan Award for Architecture (AKAA) is an architectural prize established by Aga Khan IV in 1977. It aims to identify and reward architectural concepts that successfully address the needs and aspirations of Islamic societies in the fields of contemporary design, social housing, community development and improvement.

The Pritzker Architecture Prize is awarded annually “to honor a living architect.

The Shanti Swarup Bhatnagar Prize for Science and Technology (SSB) is a science award in India given annually by the Council of Scientific and Industrial Research (CSIR) for notable and outstanding research, applied or fundamental, in biology, chemistry, environmental science, engineering, mathematics, medicine and Physics.

The Kalinga Prize for the Popularization of Science is an award given by UNESCO for exceptional skill in presenting scientific ideas to lay people.

A Grammy Award, or Grammy, is an accolade by the National Academy of Recording Arts and Sciences of the United States to recognize outstanding achievement in the music industry.

The Abel Prize is an international prize awarded annually by the Government of Norway to one or more outstanding mathematicians.

This award is given to individuals and institutions for their contributions towards social, economic and political revolution through non-violence and Gandhian philosophy. The award carries Rs. 10 million in cash.

The Green Star Awards recognize those who have made extraordinary efforts to respond to environmental disasters around the world.

The Pulitzer Prize is an award for achievements in newspaper and online journalism, literature, and musical composition in the United States.

Books in Indian Languages and English.

It is an initiative in India to recognize the best practices in e-Content and Creativity.

Prize by the International Women’s Media Foundation (IWMF) for women journalists. It recognizes women who write from dangerous areas

Prize by the Harmony Foundation.This is an organization created by Abraham Mathai in Mumbai. It is the only award in the name of Mother Teresa recognized by the Missionaries of Charity.This honour individuals and organizations that promote peace, equality and social justice.